The Logic Surface Grader or Menage Grader is quick and efficient at grading the menage, levelling any surface material, whether it be simply sand or one of the more sophisticated, softer compositions such as rubber chip. 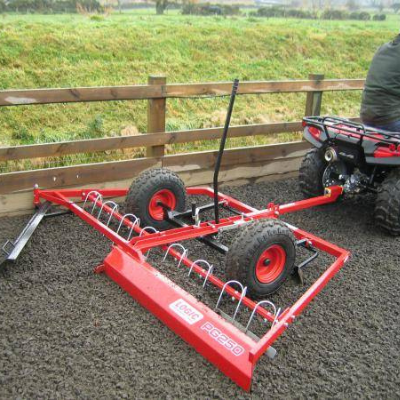 Compare
The following item was added to the comparison.

The Logic Surface Grader or Menage Grader is quick and efficient at grading the menage, levelling any surface material, whether it be simply sand or one of the more sophisticated, softer compositions such as rubber chip. The optional bar of tines works deeper into the surface than the main levelling blade mixing and aerating the components. This is essential for rubber chip and bark surfaces but also beneficial for preventing compaction on any sand based surface.

It can be towed behind any suitable vehicle for the arena composition (if available, a quad is ideal for this sort of application because of its low ground pressure). The Grader is light to tow and offers ‘one pass’ levelling to ensure the arena is quickly back to its best, ready for the next session. Logic’s unique design ensures that this grader really does provide the best level surface possible.

If you are unsure about the correct specification you require for your surface please speak to Logic.

What does this do?

When working horses in an arena, the surface material can quickly get kicked up by the action of the horse’s hooves. It gets built up around the perimeter boards, and the route used by the horse in its exercises becomes rutted and uneven.

Why do I need one?

You’ve invested a lot of money and effort into your arena: make the most of it by keeping it in the best condition possible! Levelling an arena by hand can take a huge amount of time and is a back-breaking task. In the past, people have dragged an old gate or pallet around the arena to quickly ‘dress’ the surface back to a level appearance. Although this can help smooth out the ruts, it doesn’t combat the build-up of material around the side boards and because it has no way of penetrating through the surface into the depths of the material, it cannot redistribute the subsurface material evenly resulting in the predictable ‘step response’ of your arena surface being lost.

How does it work?

The grader blade has a ‘perimeter plough’ section which opens to allow material built up around the edge of the arena to be pulled away from the boards before levelling. A rubber skid on the outer edge of this section prevents damage to side boards. The optional tines penetrate into the surface, effectively redistributing the material to the chosen depth.

The wheel track levelling skids provide an absolutely level track for the wheels to run on, so preventing any skipping of the blade that can happen if the wheels jump over a particularly big bump. The depth adjustment is easily set, and the unit can be raised and lowered for transport or to allow the unit to be reversed into difficult corners.

Request a Call-Back from
one of our experts